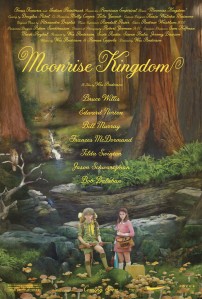 Rating: See it in theaters

Let me start by saying I love Wes Anderson movies.  Whenever I watch one of his movies I find myself laughing or chuckling harder than anyone else watching it with me.  His dry humor just gets me.  That being said, I really enjoyed this movie.

This movie had adventure, explosions, daring rescues, lightning, and precariously placed tree houses (all done in Wes Anderson style obviously), but at its heart it was a fun, quirky romance.  The movie takes place on the New England island of New Penzance in the 60’s.  The island is home to miles of walking trails, a small camp which houses the Khaki Scouts, several rivers, a small town, and not much else.  It serves as the perfect setting for this movie’s melancholy, humor, and story of childhood.  Think back to when you were a child and the world was still fascinating yet confusing.  Some kids were weird just because, and you had a crush on that one special member of the opposite sex.  Everything seemed way more complex than it was, and each day your adventures were only curbed by the limits of your imagination.  Anderson managed to capture all of these elements of childlike wonder into one terrific story.

The story begins with an inspection on the Khaki Scout grounds, lead by Scout Master Ward (Edward Norton).  The inspection goes fairly well but for one big problem.  Sam Shakusky has flown the coup.  The other campers don’t seem too worried about him because he is not very well liked, and is considered emotionally unstable.  Across the island, the Bishop family realizes that their oldest child, Suzy has gone missing.  It probably doesn’t take a genius to realize the two are together.  We find out they met a year earlier, are in love, and running away together.  The rest of the movie follows these two as they adventure through the island, learn more about each other, and try to escape from literally every other character in the movie.  Newcomers Jared Gilman and Kara Hayward do a fantastic job as the twelve year old fugitives, and genuinely make you believe they care for each other (as much as a twelve year old can).  By the end of the movie I was truly rooting for them.

The supporting case in this movie was phenomenal.  Mainly because of Andersons genius ability to take huge name stars, have them work well together, and not let them steal the show.  They all do a fantastic job playing their parts, while allowing their younger counterparts to steal the show.  As stated before Ed Norton plays the scout master/math teacher Ward.  He is loyal to his scouts almost to a fault, and is one of the few adults who you actually root for in the movie.  The other main protagonist adult is Captain Sharp, played by Bruce Willis.  He is the police officer trying to track the children down.  He is kind, caring, and even a bit dopey at times.  The cast is rounded out by Bill Murray (more on him later) and Frances McDormand as Suzy’s parents, Tilda Swinton as Social Services, and even Jason Schwartzman and Harvey Keitel show up.  They are all great.

I said I would come back to Bill Murray.  There are some duos on Hollywood whom I feel need to take a break from working together.  These guys for instance.  This is Bill Murray’s sixth movie working with Wes Anderson, and I don’t think the friendship should ever stop.  Their comedy styles just click, and are hilarious every time.  Its subtle, dry, dark humor and I love it.  This movie is no different.  Bill Murray is not in the movie a ton but when he is it is great.

Overall this movie will take you on a great, loving adventure back to childhood.  Wes Anderson’s ever unique style is present, and adds to the fantastically filmed movie.  The actors are great, the story is great, the style/look is great.  I think just about anyone will enjoy this movie.